How to install Linux OS without Error – Step by Step Tutorial

Most of the peoples still stick on some outdated OS(Windows XP,Windows 7) and don’t show any interests or give a try on OS like Linux. Through in this article we give some basic knowledge’s about What is Linux OS and it’s Advantages?, How to Install Linux os?, Is User friendly?, What about software’s and much more.

What is Linux OS? and How to Install Linux?

Linux resembles like UNIX and created by Linus Torvalds in University of Helsinki, Finland. The first Linux OS was released on September 17,1991, but can’t reach as he expected. And starts gaining importance after 1992, now Linux is the best OS in the market with 1.76% of overall Installation.

Just like windows, Mac, iOS and Chromebook, Linux is an Operative System with a regular graphical interface. But it is a Complete open source program, and also free operating system, available for PC, Laptop and Android smartphones.

Due to its open source, the codes have been used to develop Linux OS is available to public view. So, million’s of programmers all around the world give their contributions to Linux OS. And they can also releases their work under General Public License (GPL).

Now, thousand’s of Linux OS varieties available for beginners to expert levels, at free of cost. And have 24*7 community support from that particular OS developer team.

Why we choose Linux OS? & What are it’s Advantages?

Fore more detailed guide on How to Install Linux OS may helps better to you understand.

Note: Some Linux OS requires only 128MB RAM with 2GB Disk space and you can live test them without Installing with Linux booted USB drive.

If you want to try and Install famous and Recommended OS like Ubuntu, Linux Mint, Manjaro Linux, MX Linux, Elementary OS, Debian and Kali Linux as your Primary/Single OS. It is Recommended for a better experience,

How to Install Linux OS?

This guide will help you to find best Linux OS for your requirements – Click Here.
This is the first step on, How to Install Linux?
Before downloading Linux ISO file, check your PC/Laptop’s architecture, Whether it is 32 bit or 64 bit. Then download Linux OS ISO file as per your system requirements.
To check your systems architecture,
Go to control panel > system properties > system type (see whether it is 32 bit or 64 bit)
Note: Probably most of the 32 bit Linux OS ISO file also works fine on 64 bit (Not Guaranteed).

The Second step on, How to Install Linux?
Use Rufus app for booting OS on your windows, that makes easy bootable pendrive in just few clicks. You can Download latest Rufus app from below below link,
Download Rufus
Then Install Rufus app and Open the app,
Select Insert pendrive for booting OS and add downloaded Linux ISO file from your PC.
Next configure, partition style as MBR or GBT
Go to computer management(Windows users) >> Select any Partitioned drive(Hard Disk) >> Properties >> Volume >> You see whether it is MBR or GBT.
After all set, Click Start to write OS on pendrive, and wait sometime to complete.
After successfully created bootable pendrive, close the app and Remove pendrive from PC/Laptop.
Similarly Mac user use Universal USB Installer for Booting OS. And for Linux usersuse Etcher for Creating Bootable Pendrive.

Note: Always prefer UEFI Installation method, Which is Better than other installations methods.
Insert Booted Pendrive into the PC/Laptop and restart the computer. While booting Press F10 or F12 or Delete key to enter boot menu. ( or refer yourself on google for your PC/laptop model). And choose the OS boot from USB.
If you are Running On Mac OS,
Holding down the Command + Option + P + R keys, on boot up. It Will show all bootable devices connected, to your Mac computer, but select booted USB device to boot Linux OS.
After successfully entering into boot menu either using, above key combinations, you’ll see new Linux environment(Live Boot mode).
Step 1: Select Installation
Step 2: Follow it prompt setup with necessary details. Such as Language, Country, Keyboard type and Set Username and Password.
(Skip Network Configuration and Continue, otherwise it will take up to 2 to 3 hours for Installation)
Linux Drive Partitioning:
Linux distribution uses, EXT4 drive format for partitioning. If you do not select any partitions to install Linux OS, it will format and Install OS without any Partitioning.
Select Partition as manual or otherwise you loss data’s in Hard Disk.
If you want to Install Linux as secondary OS 10 to 20 GB Disk space enough.(Find minimum requirements to Install that particular OS before booting)
If you want to Install Linux as Primary and Single OS,(For 500 GB Hard Disk)
1. Allocate 100 GB for Root partition(/)
2. Allocate swap area as RAM*2
3. Allocate – /var as per RAM of your device
4. Allocate – /Boot/efi – 1 GB
5. Allocate – /Boot- 1 GB
6. Allocate Remaining space – /home
(Refer below image) 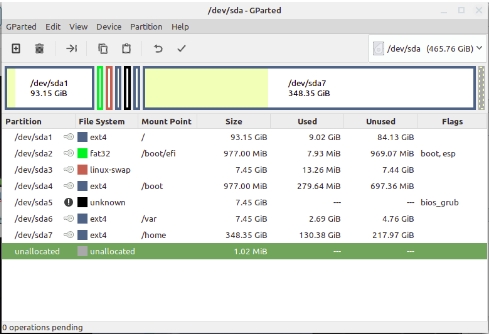 Plenty of Linux distributions available from beginner to expert level. In which Ubuntu,Linux Mint, Manjaro Linux, Elementary OS, MX Linux and so on. If you are coming from Windows, you can try Linux Mint. Which is the best operating system, with greater stability, customisability and Community support.

Refer below Linux OS installation tutorial, that helps better. Because each Linux distribution Installation prompt are quite differ from one another. So you must read following articles of How to Install Linux?.

How to Install Linux OS on Android Smartphones?

Plenty of Linux OS now available for Android devices too. Some of them are, Ubuntu touch OS, Sailfish OS, Paradise OS, Kali Linux and so on.

If would you like to Install Linux on Android,Read below article

How to Install Linux Custom ROM on Android?

Root is not necessary to Install Linux OS, But your device must have,

We hope this article of How to Install Linux? will helps better understanding about How to Install Linux OS?. But further proceeds, take complete Backup of your PC/Laptop before Installation. Because Linux uses EXT4 system file format. If you wrongly partitioning, It may Erase all of your data.and We are not responsible & encourage you to Install.

For more help on, How to Install Linux OS?. Feel free to ask in Comments. We are waiting for guiding you. Hope this article will helps you, don’t forget to share.

How to Install Kali Linux? – Easy Step by Step Tutorial

How to Root Redmi 10X with Magisk- Easy & Without Error

This website uses cookies to improve your experience. We'll assume you're ok with this, but you can opt-out if you wish. Accept Read More